(Beyond Pesticides) New data released by the U.S. Department of Agriculture (ISDA) earlier this month, indicating a slight increase in the number of honey bee colonies, is masked by beekeepers’ efforts to split hives in the face of losses. The USDA reports that Colony Collapse Disorder losses (CCD) are down 27% compared to the past year. While 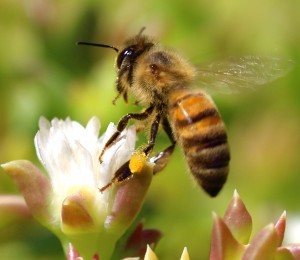 these numbers may seem to be a positive sign after over a decade of consistent pollinator declines, they are more indicative of a beekeeping industry that is using every available tactic possible to stay viable. With the continued use of highly toxic neonicotinoid insecticides in farms, gardens, and public spaces throughout the country, the long-term health honey bees and other pollinators continue to be in jeopardy.

According to USDA’s National Agricultural Statistics Service (NASS), the number of beekeeping operations with five or more colonies reported a total of 2.89 million colonies in April 2017, a 3% increase from April 2016, when numbers stood at 2.80 million. News media such as Bloomberg hailed this report in an article headlined “Bees Are Bouncing Back From Colony Collapse Disorder.” However, a closer look into the numbers and beekeeper accounts reveals what is actually occurring.

A more accurate reference point for the beekeeping industry would be beekeeping numbers reported in January 2017, during winter, which at 2.62 million remained unchanged from January 2016. Overall increases from January to April likely represented beekeepers ‘splitting’ hives, a practice through which beekeepers will create two or more hives from a singular strong hive. Although on paper this is displayed as an increase in hive numbers, in reality these hives are weaker than the colony from which they originated.

A separate report from the Bee Informed Partnership published in late May 2017 indicates that colony declines over the past year stood at 33%, which is less than losses of 44% seen in the 2015-2016 loss reports, however far from normal, or economically viable rates. As the USDA NASS report indicates, reports of CCD, the name given to the mysterious disappearance of honey bees from an otherwise healthy looking hive filled with honey and brood, have decreased significantly. While this also appears to be good news, it is understood based upon past Bee Informed Partnership surveys that while CCD reports are down, summer colony losses ascribed to other, understood loss factors are up.